RECENT POSTS
MOST RECENT POST
Did Buzz Aldrin See a UFO in Space?
'Professor Richard Dawkins Speaks at Fair Hills Ki...
The World's Most Dangerous Roads
Kitschmas v. Walt Kitschney
Stay Out of Riverdale
'The Strangeness of Superman's Cuckoldry'
Atheist-on-Atheist Violence
Very Short Reviews of Movies in Other Languages
'Tis the Season
Let's Give a Welcome to Macaca Here 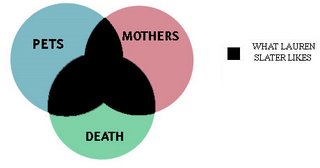 Longtime readers know that I'm a fan of the Best American series; despite my reservations about a selection process that inevitably results in 6-10 pieces from the New Yorker every year, the volumes are generally good reads. Unfortunately, this year's Best American Essays, edited by Lauren Slater, is by far the worst edition of the series I've read. The essays themselves are generally decent; what's lacking is anything resembling variety. The chart above is no exaggeration: nearly every essay in the book is about dead pets, dead mothers, or dead mothers and their pets (also dead). A third of the way through the book, this pattern is evident; two-thirds of the way through, it's downright embarassing.

The stand-out essays are the few which escape the hegemony of dead things: Oliver Sacks's "Recalled to Life," Emily Bernard's "Teaching the N-Word," Peter Selgin's "Confessions of a Left-Handed Man." And, yes, to be fair, several of the dead-pets-and-or-moms essays are quite good too: David Rieff remembering his mother, Susan Sontag, for instance.