RECENT POSTS
MOST RECENT POST
Black Friday
Reason and What?
A Thanksgiving Prayer
100 Notable Books of 2006
What I'm Thankful For
Free Day
How to Become Kurt Vonnegut's Biographer
Action! Psychology
I Brought Everything I Needed
The Amputee's Guide to Sex 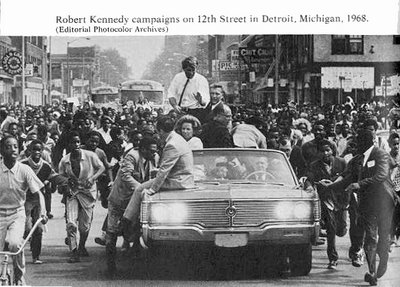 We saw Bobby this afternoon, about the day my good friend Shankar once called the worst in American history, the day Bobby Kennedy was shot.

The last thirty or so minutes of the film are a tour de force, an agonizing wait for Sirhan Sirhan that borders on the exploitative, followed by a stirring montage over one of Kennedy's calls for national unity that I suspect will reduce many to tears. These minutes are so good that if America were a place where thirty-minutes movies were finanically viable, I think the movie would have been just thirty minutes long.

Much of the film feels like padding in comparison. Bobby is heavily influenced by Crash, to its detriment, and goes for precisely the same sort of "character" moments, roughly with the same result.

The movie's other flaw is that it twists itself into contortions to draw parallels between 1968 and the Bush years. Not that such parallels don't exist—but when your movie about the RFK assassination begins with a TV reporter talking about automated voting and hanging chads, you're being too cute by half.

Neither of these flaws is by any stretch of the imagination a reason not to see the movie; after those last thirty minutes, trust me, all is forgiven. Indeed, just about the only reason not to see Bobby is to punish the Weinsteins for signing a four-year exclusivity agreement with Blockbuster. And this is, to be fair, a very good reason -- but you should probably see the movie nonetheless.
# posted by Gerry Canavan @ 7:14 PM  |